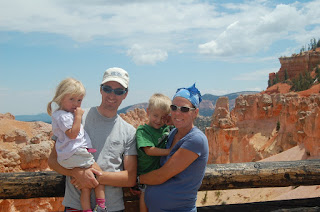 We recently took a small excursion to Bryce Canyon to camp and for Tom to run the Bryce Canyon Half-Marathon (Ruby's Inn to Cannonville). It was a fun escape from the heat of Hurricane. 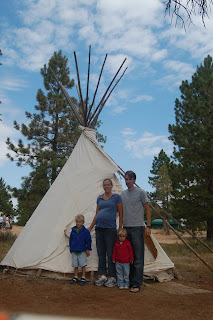 We slept in a "Tipi" at Ruby's Inn Campground.

The kids and I enjoyed watching Grandpa and Brother Ballentyne finish the race (we missed Tom's fast finish because we were stuck behind the slow runners en route to the finish line).

After the race we went back to Cannonville for the Utah Old-Time Fiddlers jam session.Not only was the music old-time, so were 99 percent of the fiddlers.

The kids also enjoyed homemade root beer (only 50 cents) and bright blue cotton candy. Porter also had lots of fun on the playground, which has quite possibly the last surviving merry-go-round in the state. Porter could only play on it for about 5 minutes before we decided it was way too dangerous. We left the concert before it ended on account of the torrential downpour. But the concert continued long into the night.

On Sunday we enjoyed the scenes of Bryce Canyon via canyon shuttle and automobile. We were real tourists spending less than 3 hours total in the Park, stopping at various viewpoints along the way to snap a quick photo. Tom and I decided we definitely need to go back and do some real hiking down in the canyon.

Here is a quick recap on our Fourth of July celebration:

We started the day enjoying the parade. Most of the parade entries threw candy to the children. Because there were no other kids sitting near us, Porter and Eliza came away with quite a candy stash.

After a lazy afternoon, we headed to Springdale to enjoy the best small town Fourth of July celebration in the nation, maybe even in the world. We enjoyed a barbecue provided by Chief Wright. Porter and Eliza played at the playground. Then we staked out our spot on the softball field to watch the fireworks.

The skydiver landed right next to us (Eliza was concerned that he was going to land on us - but he didn't).

We purchased glow sticks for Porter and Eliza. Then Tom's friend, Matt, bought three more and gave them to the children. We discovered a fun photographic trick using the glow sticks.

Porter's soon to be Kindergarten teacher (Becky Barker, as Porter informed us) sang the National Anthem. A nice dramatic touch was a solitary firework ignited as she sang the phrase, "...and the rockets' red glare, the bombs bursting in air..." After the singing, the fireworks began in earnest.

An errant spark from the first batch of fireworks ignited a small brush fire on the hillside. Fortunately, the Rockville/Springdale Fire Protection District was positioned around the firework area to contain the fire.

Due to the unusually dry conditions and heavy winds, the small fire quickly became a big blaze.

The fireworks show was cut short, and spectators asked to orderly and calmly leave the area. Interestingly, Porter and Eliza were terrified of the fireworks, but not at all of the raging blaze. All in all it was a fun and memorable Fourth of July.
Posted by Dansie Family at 9:40 AM 2 comments:

We decided to have a pre-4th BBQ with my parents and grandma since we wouldn't be together on the actual 4th. I tried some new recipes and thought I would share.

For a starter, we had Fried Green Tomatoes. 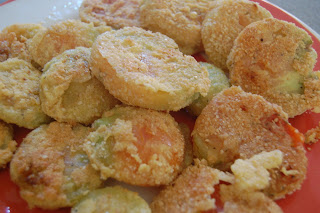 It was my mom's suggestion after I told her I only had one ripe tomato from my garden to put on the salad. They were very tasty and easy to make. Even Tom, who used to be deathly afraid of tomatoes, ate at least three.
I sliced the firm, still mostly green tomatoes into thick slices and seasoned them with salt and pepper. 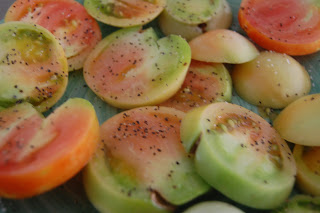 Tom dipped them in flour, then beaten eggs, and then a mixture of lightly salted corn meal and bread crumbs. We fried them in bacon grease (this is a southern comfort food after all) and served them hot.

We enjoyed a tossed salad, baked potatoes with the fixings including fresh garlic chives from my garden and chipotle sour cream, and fresh baked rolls with 75% Kamut (a yummy and healthy whole grain).

My favorite side dish was the Grilled Cantaloupe. 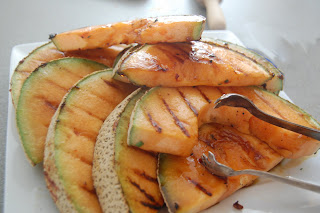 We just cut the cantaloupe into slices and grilled them on the gas grill. We brushed them with honey and ate them up. They were sweet, tender and juicy. 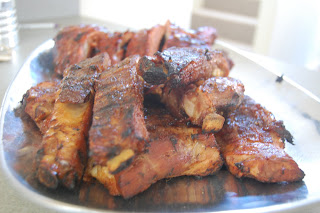 I made some alterations to the recipe, one major. I omitted the bourbon. It's pretty hard to find here in Hurricane so I substituted extra cider vinegar and apple cider. I also didn't have any ground mustard. I cooked the ribs in a crock pot on low for 6-7 hours so I wouldn't heat up the house. I grilled them, basting a few times with the sauce. The meat was so tender it just fell off the bone. The flavor was not your classic rib flavor, but so uniquely delicious. The ginger and cinamon were really fun additions. Tom claims they are the best ribs he has ever tasted in his life (and he has tasted lots of ribs).

Overall, we had a super fun and delicious bar-b-que. 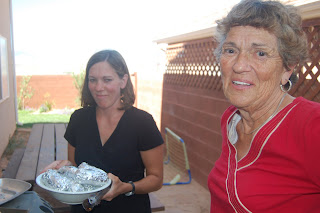