I haven't written a race report in a long time, but decided I wanted a record of Saturday's race even though it wasn't a PR or even an extraordinarily strong race that I was prepared for. 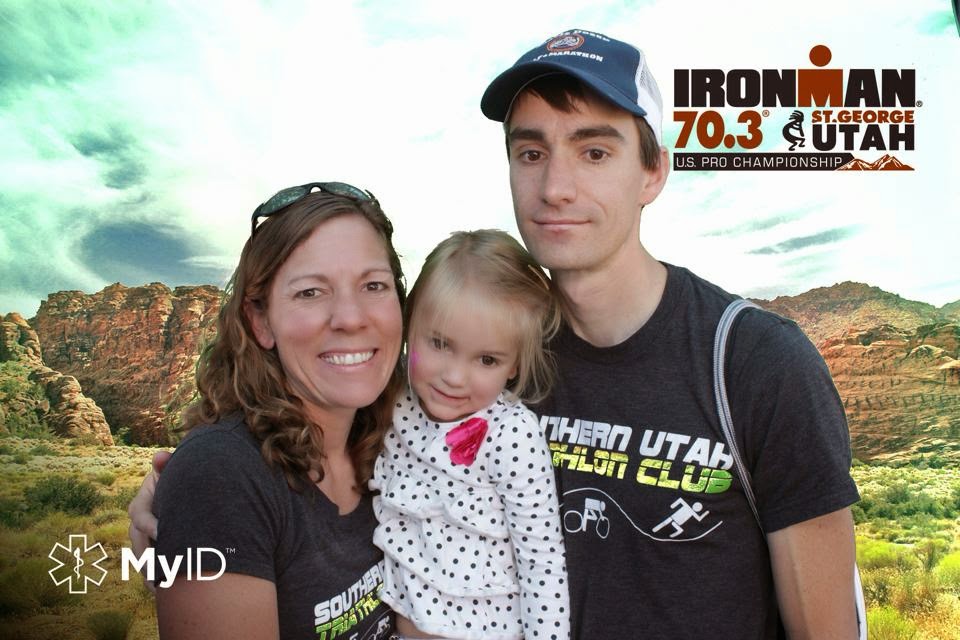 The day before the race, Tom was able to take most of the day off. We enjoyed a tri club breakfast, picking up our packets and enjoying the expo with Millie. Great way to get ourselves psyched up for the race. 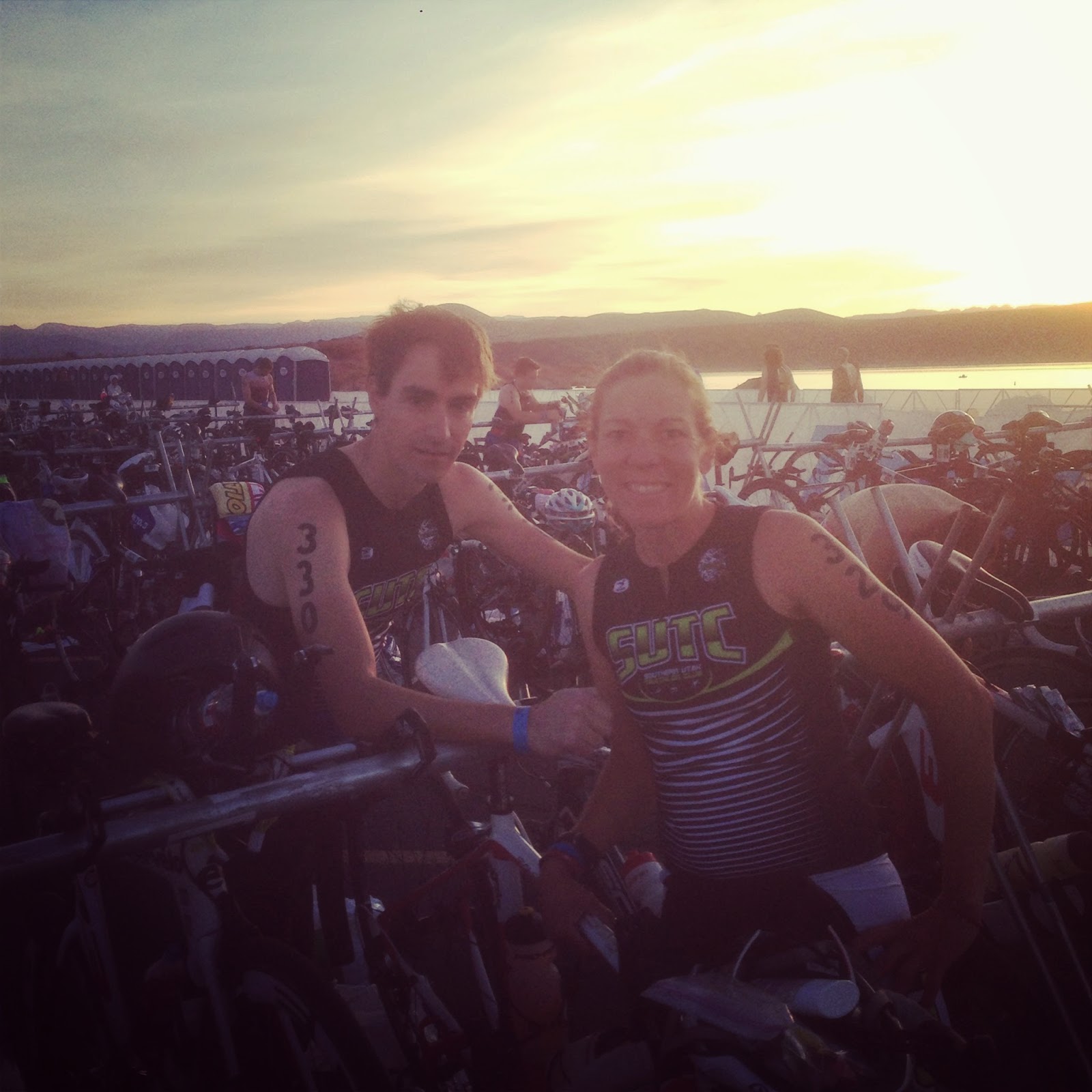 The morning of the race didn't quite run as smoothly. We thought we had worked out everything perfectly (sitter, ride to the start, and everything). We left in what we thought was plenty of time to get to the start without having to go all the way into St. George for the shuttle, but we failed to realize the traffic getting into Sand Hollow. In year's past, we've taken the back road in and had no problems, we all forgot this year and hit a major backup.  It took us over a half hour to get to the entrance to the park which is still almost a half mile from transition. Karrie, Tom and I booked it as fast as our legs would go up the hill to transition. Tom and I barely made it into transition before it closed.  Karrie did not make it and had to jump the fence and she was in the first wave of swimmers. I think she barely made it. We made it in plenty of time since our waves were 30 minutes after the first, but I didn't have time to go pee, forgot to take my salt pills and anti fatigue pills, and forgot to grab a bite to eat.

Swim, 1.2 miles, 42:12
The swim waves are 3 minutes apart. After the gun went off for the previous wave, I had 3 minutes to swim the 100-200 yards out to the start line. I didn't make it, and found out after, many people didn't make it. I figure that added at least 1 minute to my time. The water felt great and not cold. I was able to get in a groove quickly and never panicked. I was only mildly annoyed when I hit the first corner at the same time that the fast swimmers from the next wave did and was kicked and jostled a bit. Still didn't panic, just got annoyed. The swim was a 3 parts of a rectangle. After the first turn was a really long stretch that never seemed to end.  Every time I got to a buoy I prayed it was a red buoy indicating the final turn, but they kept being orange. My lower back started aching really bad about half way. I just kept going and did finally resort to less kicking after the last turn for a bit of relief (which is hard to do for me because most my momentum comes from my kick not my stroke). I was satisfied with my swim considering how little I swam this winter (maybe 10 times all winter with 2 times in the pool swimming 1.2 miles and 3 times in the lake swimming 1/2 mile - 1 mile). I was 2 minutes slower than last year and finished 304 out of 588 women.

T1, 5:10
I suck at transitions. I took my time making sure I had food since I didn't eat before the swim. Ate a waffle, put food in my pocket and bag (I should have had the food already in my bag, but was too rushed before the race to remember), and grabbed a drink. Stuffed everything in my gear bag and took off. I definitely need to improve on my transitions. 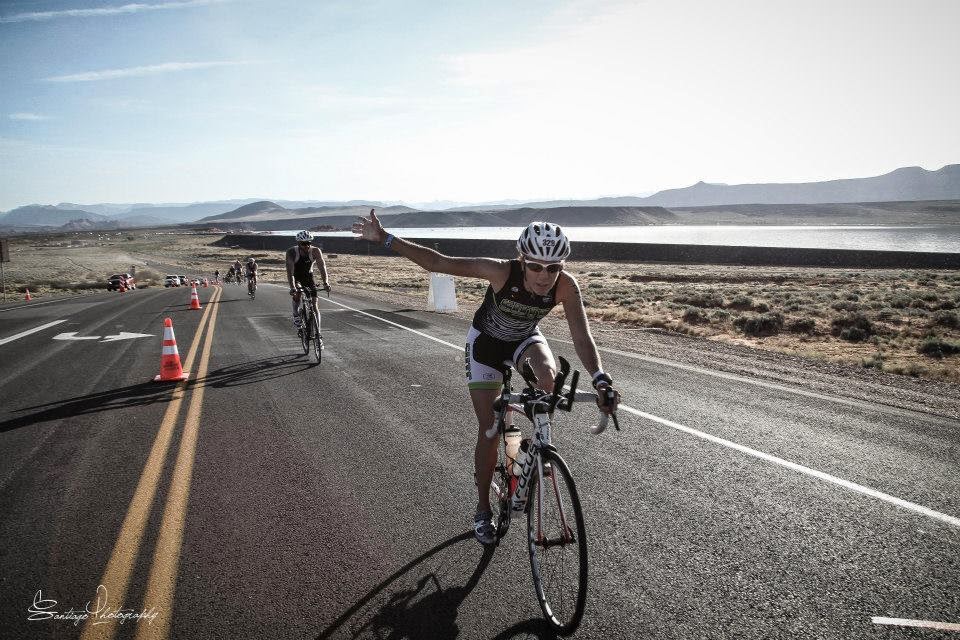 Bike, 56 miles, 2:55:26
I was 3 minutes slower than last year, but considering my lack of training again, I am completely satisfied. I hadn't ridden more than 40 miles since November. I did feel confident on Snow Canyon since both times I ridden it this spring, I did it twice in a row. The ride was a tad harder than last year with a little extra hill right out of the gate. Not sure if it really made a difference, but mentally it did to me. It was fun to see Alex and Cherie out on the course photographing. He's pretty amazing. I felt good up nemesis. 3 men passed me, but I passed 2 of them back before the top and no women passed me on the climb. Obviously, many men passed me on the bike as a whole, but only 1 woman passed me the entire ride. My goal was to not let Tom catch me until Snow Canyon at mile 40 (last year I held him off until mile 2 of the run, but I had a 6 minute head start and this year just had 3 minutes). He caught me on Snow Canyon Parkway a few miles before the climb. I was mad, but happy he was having a good day. I knew his swim had greatly improved. I kept him in my sights until the climb. Snow Canyon is always harder on race day than I expect. Tired legs, a little bit of dehydration, and the heat were all factors this year. I did  good job at taking salt pills and anti-fatigue, but only drank probably 24-30 oz total on the whole ride. Oops!  I ate the waffle at the start of the ride and one honey stinger gel. I probably should have consumed double the calories and fluid that I did. I just muscled through the climb and got through it thanks to the Booyah! Foundation. The Booyah! Foundation is a non-profit started in honor of fellow triathlete Braydon Nielson who was tragically killed less than a year ago while on a training ride. His attitude and smile were infectious and he always made every race better. He wasn't the fastest out there (in fact he didn't quite make the bike cut off in 2013) but he was definitely the most excited and determined one out there. He will be forever missed but never forgotten. The Booyah! Foundation made posters of Braydon with some of his inspirational quotes to help everyone up the climb. And they did. Seeing his smile and hearing his words encouraging me up the climb, did the trick. It may have reduced me to tears, but helped me muscle through the pain. My hamstring started hurting pretty bad on the ride and I was worried how it would feel on the run. Luckily, the back pain from the swim didn't bother me. I'm sure the 2 are related. At the end of the ride, I moved up to 139th women.

T2, 3:29
I had forgotten to pee in the lake and wasn't going to stop on the bike and I'm not quite hardcore enough to do it on the bike, so I really had to go now. I will attribute some of my slowness to the potty stop out of transition. I also forgot to grab my anti fatigue pills, but luckily had the 2 I forgot to take in the morning in my pocket. I at half a waffle on the way out. I'm glad I put my Yankz! in my shoes. 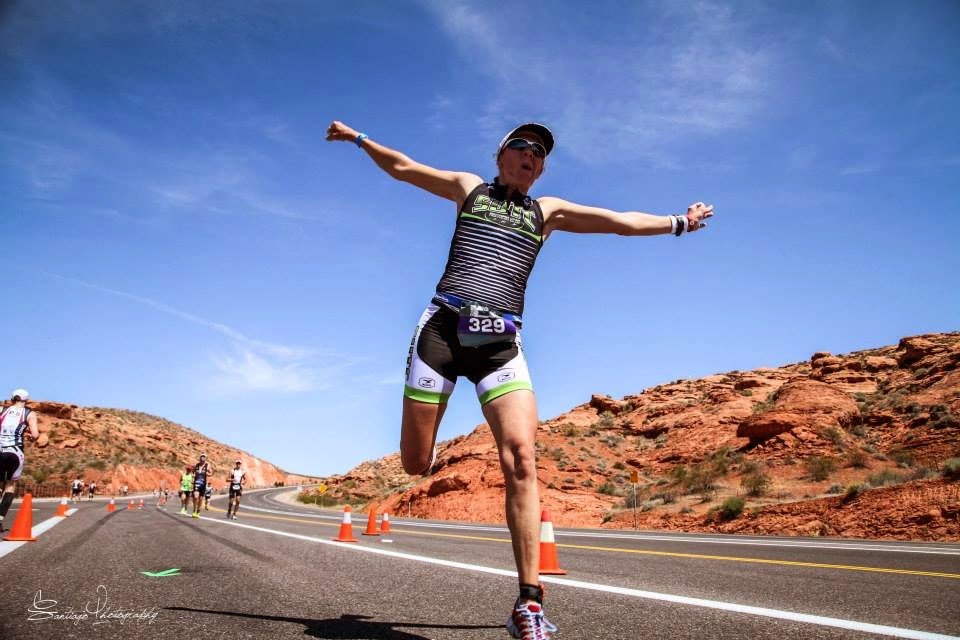 Run, 13.1 miles, 1:50:18
I knew the run was going to be hard. It was over 90 degrees, the course is super hilly and it just sucks. My goal was to keep it under 2 hours. I would need to maintain a 9 minute pace. So I knew I would have to sub 9 on the flats, way under 9 on the downs and just get through the climbs. The first 3 miles are uphill. A gradual climb for 2 followed by a steep climb for 1. I was tired, but was sub 9 for the first mile, right at 9 for the second and over 10 for the 3rd. but I was still on track. I didn't walk any climbs, but did walk all the aid stations. I got coke and perform and water at most and dumped ice down the bra. Took an anti-fatigue at the beginning and halfway. Took salt maybe 4 times thoughout. I knew once I got to mile 3, the hardest part was over. 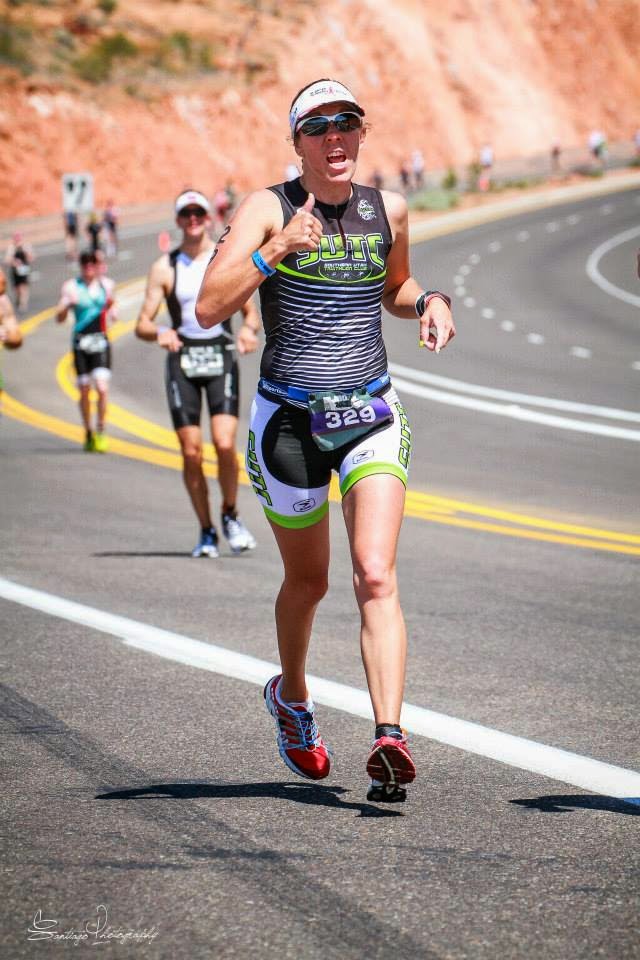 There were still rollers throughout, but the big climb was done and the last 3 miles are downhill. The coolest part about the race was Booyah attitude. The Souhern Utah Tri Club was well represented and anytime we passed one another, we yelled Booyah! to eachother. It was so awesome and made an impact on the other runners. I had a guy tell me that was the coolest thing that we all encouraged each other the whole race. I don't even know half the tri club, but If I saw a jersey, I yelled. I was able to maintain about a 9 minute pace through out. I was a little faster on flats and downs and right around 9 on most climbs or a little over on big climbs. Once I hit the top of the last climb, I knew I had 3 miles of downhill and I just needed to give it all I had. I averaged 7:30 over the last 3 miles. I was happy and felt pretty good. Hamstring was hurting but holding out. Angel, Treasa, Shannon and other random people yelling my name really helped. 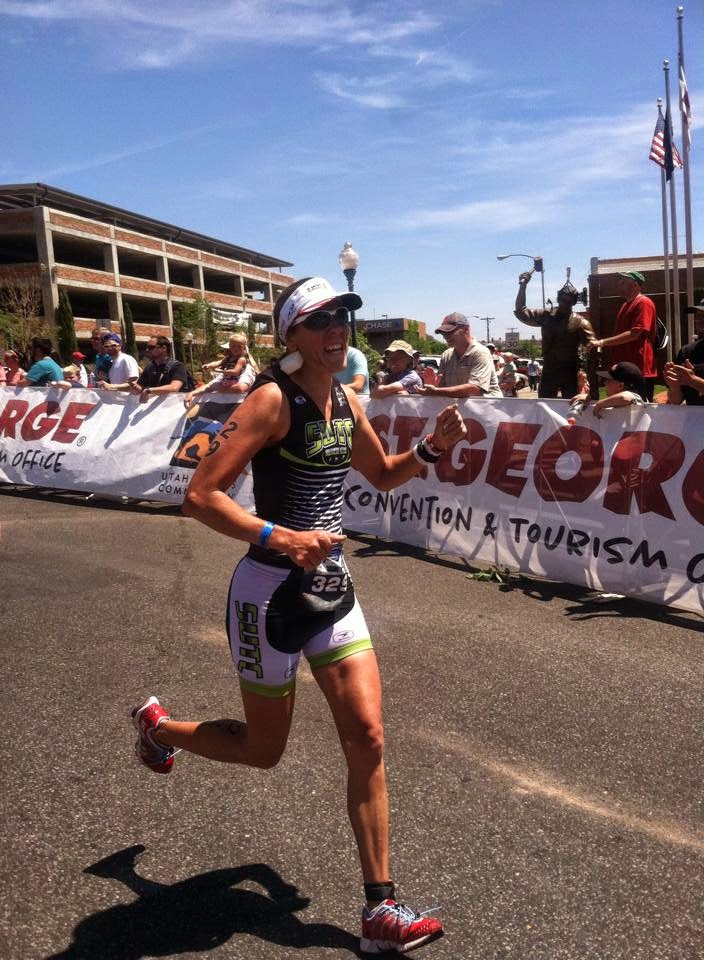 Running down the homestretch was awesome. I just gunned it and yelled Booyah! a million times to get the crowd going. Plus T was there and mom and sister. I ended up 110th women by the end of the day and 17 in my division. My run split was 2 minutes faster, but the course was a little short so I was probably about the same.

The finish line was great and seeing all my peeps was great. Everyone did amazing and I am so happy to be part of such an amazing community. 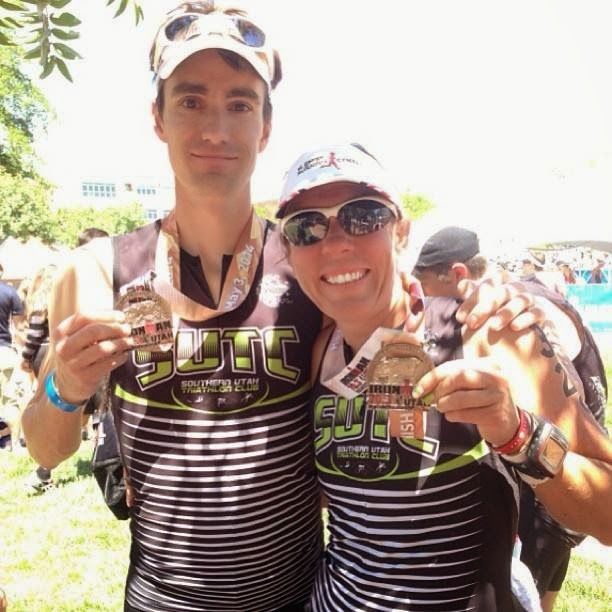 And of course, I couldn't imagine doing this with anyone else other than the most amazing man in the world. He is my rock and I love him to bits! I love training with him and having his encouragement and I love the he is amazing! He PR'd on this course by 8 minutes. He improved his swim by 3 minutes, his run by 5 for a finish time of 5:12:06


Ironman 70.3 St. George, 5:36:35, 110th women, 17th division.
I was less than 2 minutes slower than last year and considering everything I am completely satisfied. As always, next year I will train more ;) 5 extra pounds didn't help. Nor did slight dehydration and being under-trained.


Next up Zermatt Ultra and a 3:18 at the St. George Marathon. Dedicated training starts NOW!
Posted by Dansie Family at 10:55 AM 1 comment: