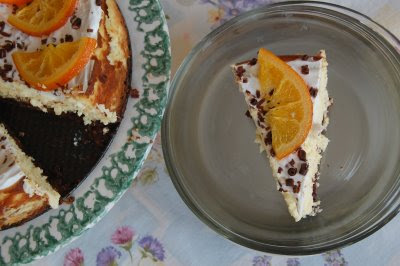 I found this recipe in April's Bon Appetit, of course and had to try it for Easter. I altered it, changing from the original lemon cheesecake to orange. Orange and chocolate sounded better to me. And it gave me a reason to try make candied orange slices. I loved it all.

The crust did not turn out to have a brownie consistency but was crunchier and still very delicious. The cheesecake was very rich and very deep. The top turns a little brown when baked. That is why it has the topping. Here is my altered recipe. The original can be viewed here. 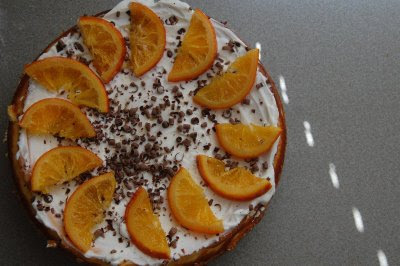 
Preheat oven to 350°F. Spray inside of 9-inch-diameter springform pan with 2 3/4-inch- to 3-inch-high sides with nonstick spray. Whisk flour, cocoa, and salt in small bowl; set aside. Combine chocolate and butter in medium metal bowl; place bowl over saucepan of simmering water and stir until melted and smooth. Remove bowl from over water. Add both sugars to chocolate mixture and whisk until blended. Let cool until mixture is barely lukewarm, about 10 minutes. Whisk egg and vanilla into chocolate mixture. Fold flour mixture into chocolate mixture. Spread brownie batter evenly over bottom of prepared pan.

Bake cake until puffed, light golden, and set around edges (center will still move slightly when pan is gently shaken), about 1 hour 20 minutes. Remove cake from oven. Maintain oven temperature.
Spoon 1.5 cups yogurt or sour cream in dollops over top of cake, then spread evenly over top with offset spatula. Return cake to oven and bake 5 minutes. Run small sharp knife around sides of cake to loosen. Place pan with cake directly in refrigerator and chill uncovered overnight (cake may sink in center). DO AHEAD Can be made 2 days ahead. Keep chilled. 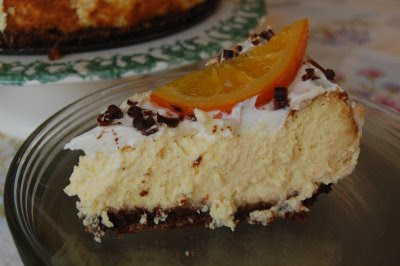 The bliss of not knowing what is to come.
All pictures from marathonfoto.com

(This is an article I wrote about my experience in Boston. I wrote it for the local paper, thus the common person, not runner. Beware! It is long, but a heartfelt narrative of my experience.)

April 20, 2009. Every thing I had done since last October revolved around what would happen on this day. And I mean everything.
I qualified for the Boston Marathon at the 2008 St. George Marathon in pouring rain and by less than two minutes. The pressure to qualify was oppressive. My husband had already qualified. The hotel was already reserved. My training said I could do it, but the rain and my head started to give me doubts. But I did it despite the pressure I felt and the pouring rain. After I crossed the finish line that October day, I thought could relax. I achieved what I had set out to do. Little did I know that I would not be able to relax for seven long months.
I qualified for the Boston Marathon. That meant I would actually have to run another marathon. Another 26.2 miles of my heavy pounding feet on hard asphalt. Another 26.2 miles of no nourishment besides Gatorade and jelly beans. Another 26.2 miles of listening to the voice in my head telling me to stay strong while the shooting pain in the rest of my body is telling me to quit.
But before I could even get to those 26.2 miles, I would have to first train hundreds of miles on rock hard asphalt, drink gallons of Gatorade and eat hundreds of jelly beans. I would have to teach my head and my heart to tough it out while trying to ease my body into the pain it would feel.
But I did it. I ran the miles every week. I trained my body to go far by doing long runs including two 20-milers. I trained my body to go fast by doing half-mile repeats at the track. I trained my body to run up hills and down hills, by running up and down hills.
April 20 came and I felt ready. I had put in the training. I had read dozens of articles on the Boston Marathon. I talked to friends who had run it before for advice. I listened to and read the words of encouragement from my friends and family. I had given my body and legs a rest the weeks coming in to the marathon. I had carb-loaded and skimped on the junk food. I checked and re-checked the forecast. I had even driven the marathon course, visualizing me running it. But nothing I could do, could truly prepare me for the experience of running the Boston Marathon.
Patriot’s Day in Boston turned out to be a cool morning with patches of clouds and noticeable wind, but not rainy as some of the forecasts had predicted. My husband and I awoke early, rode the bus up to the start line in Hopkinton with 26,000 other runners. We waited at Hopkinton High School with all the crowds. We waited for the porta-potties. We waited for the 10 o’clock start to roll around. We waited for it to warm up a bit. We waited for the porta-potties, some more. We waited for the sun to come out from behind the clouds. We waited while all this anticipation I had building up in me for seven months was starting to explode inside me. I just couldn’t wait anymore.
The call came over the PA system that I could start walking the one-mile to the start line, but I was still in line for a porta-potty. I finally made it through the line and started the nerve-wracking walk to the start. I just sort of followed the crowd, nervous and excited. I got to my corral (a fenced off area for 1000 runners about my same speed). Luckily, I didn’t have to wait in the crowded corral for long before it was my turn to start the race. I shuffled my feet with the other 2000 feet until we crossed the official start line and the shuffle turned into a slow jog as the crowd began to thin out.
Unlike The St. George Marathon, the crowd of runners never really thinned out the entire race. I was always running among a crowd. I had to watch where I was going and maneuver around every mile.
Also, unlike St George, the crowds of spectators never thinned out either. For close to 4 hours, my ears were bombarded with yells of support. I even wrote my name on my legs and shirt so total strangers could yell out my name, and they did. “Go Lizzie” floated to my ears every few minutes. I gave an energy-efficient thumbs up every time I heard my name. But when I got to Wellesley College, close the half-way point, if they called out my name, I couldn’t hear it because thousands of Wellesley coeds were screaming at the tops of their lungs for a half-mile section. Nothing could be heard but the high pitch yells of these girls holding up their signs offering free kisses. Loud, but awesome. A definite morale booster when my legs were starting to feel the fatigue of running 13 miles.

After Wellesley, the course got more difficult. The famous rolling hills of Newton began to take their toll on my quads which were very fatigued from the fast downhill miles at the beginning of the course. To be honest, the famed Heartbreak Hill at mile 20 was the easiest of the hills. I wasn’t even sure I was on it because it seemed so small. Although it didn’t seem very big, it still hurt.
It was at this point in the race that my legs pretty much wanted to quit completely. But the even larger crowds as I was getting into Boston proper continued to propel me through the miles. Running the last 10K of the course was one of the hardest things I have done in my life (and I have had three children au natural).
The rolling hills continued, the headwind off the harbor began to pick up, technically the finish was so close, but emotionally it was so far away. I began to look for my parents and my in-laws who had made the journey out to Boston to support my husband and me. I never did see them, but just knowing they were out in that crowd somewhere helped me.

They never saw me either because the guy in the tutu distracted them.

The fatigue and pain in my legs was getting worse. My form was deteriorating rapidly to a pathetic shuffle.

The thought of anymore Gatorade was nauseating. The familiar buildings of downtown did not seem to be getting any closer. I began to get passed by more runners than I was passing, including an older man decked out in a pink tutu and leotard. I stopped looking at my watch and focused just on getting through it. But soon enough, I was on the streets of downtown surrounded by the tall building and even bigger and louder crowds. The finish line was getting closer and after a couple of turns was in sight.

The last two-tenths of the last mile were glorious but excruciatingly painful. I willed my legs to move a little faster. I willed my arms to pump a little harder. I willed back the tears of exhaustion and joy. I even willed out a smile and victory thumbs-up as I crossed the finish line in 3:48:35.

Pioneer Woman Made My Day with Monkey Bread


I remember having monkey bread as a young girl, but never at my house. I have always wanted to make it, but never knew how, and never looked it up. Pioneer Woman just posted the recipe and now I am even more excited to make it. I may need to have it for dinner, except I am off desserts today. I guess it'll have to wait until my next dessert day.
Posted by Dansie Family at 3:12 PM 1 comment:

Click here for a full Hurricane Half race report.

It was a great race with lots of fun friends 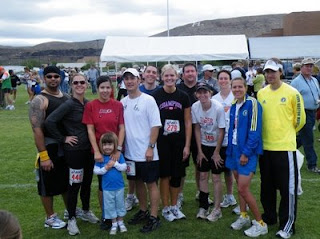 and really close sprint finish. I think I outleaned him at the line. 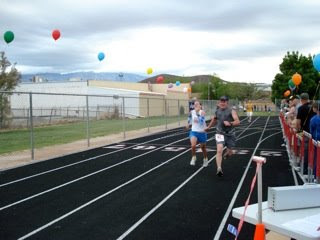 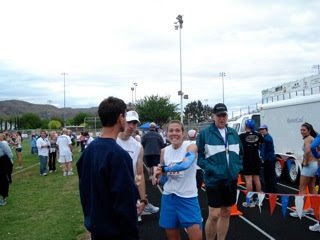 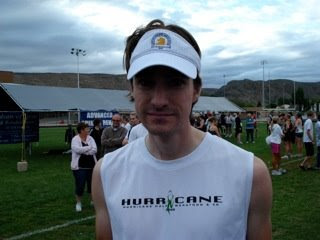