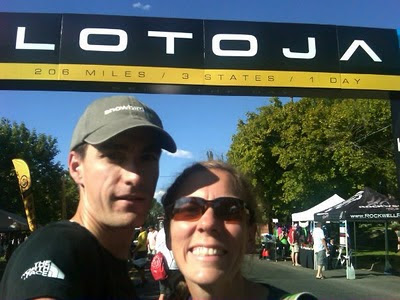 I had my doubts that I could ride 206 miles over 3 states in 1 day. I've been training like crazy, but being a mom to 4 is pretty crazy too. And I also had to split my training between biking and tri training. And they are not the same.

The weekend was starting out perfect. My sister decided to come to my house to watch my kids (so she could be close to my brother in ICU and his wife who was about to have a baby). Because of this, we were able to drive up with my riding buddy. We stopped for lunch in Provo and REI in Sandy and made it to Logan with plenty of time to enjoy the evening. I was a a ball of nerves checking in and getting my race packet. It was very real now and there was no turning back.

Race day preparations continued into the night. We went to a catered dinner with fellow VCBO racers. The dinner was not very good and extremely over priced. And to make it even worse there was no dessert. I was trying to carb load. Alicia and I nervously prepared our race day food and put it in bags to Jeff to give us at each stop. He and Marta rocked the support. They were cheerfully at each of 4 stops with our food ready, water bottles filled and encouraging words spewing forth. I couldn't have asked for a better team.

Alicia (one of my besties), Dan (Tom's brother), Steve (Tom'c cousin) and I were doing the fun ride portion of LOTOJA. What that means is that we got to start almost 2 hours before some of the racers and weren't officially racing it. We were still timed and still rode the same distance.

We started the race a 5:55 am in the pitch black of Logan. We were all equipped with front and rear light. The morning was perfect. Temps were in the 50s instead of low 40s. All I needed to supplement my amazing kit, were arm warmers, light vest, and knee warmers. The first 30 miles were flat. The 4 of us just took it kind of easy to Preston where our support met us. I ditched my knee warmers and vest, kept the arm warmers and fueled.

Nutrition for the race consisted of salted steamed new potatoes, gogurts, pb and honey on white, pretzel m&ms, and coke at aid stations. The gogurts were the best. They go down fast and easy and taste great. On the road I fueled on Shot bloks, Hammer gels, and a few bites of Luna Bars. I drank CarbRocket Half Evil (half strength) and Hammer Perpetuem. Both seemed to be fine on the tummy. I also took a few Hammer Anti-fatigues caps. I didn't take them every hour, but I could definitely feel their awesome effect.

Now the climbing began. The first climb was 20 miles. Yep, 20 miles of climbing a mountain. This climb was actually my favorite. It wasn't very steep, just a nice steady climb for a long time. I felt good. Alicia and I rode together. Somehow we lost cousin Steve (I think being from Boston didn't help). We regrouped at the neutral stop at the top. The descent was amazing. Twisty and fast. I loved it. Click here for a fun picture of the descent. We got in a pace line the rest of the way to Montpelier. We were cruising at 25 mph, but felt like we weren't working at all. Here we parted ways with cousin Steve. I feel bad, but my goal was to finish and he was cramping and starting to struggle. I don't think he was too heart broken. He did finish, but struggled with cramping all the way in.

The next section had 2 climbs. The first was a shorter but steeper one right off the bat up Geneva. It still felt pretty good. A very short descent followed and then the worst section of the race. It was windy, it was slightly uphill and we couldn't get in a pace line. everyone was either too fast or too slow for us. So the 3 of us worked together and slogged through.

The final mountain pass followed this section, Salt River Pass. Steep, windy, and just all around brutal. They time the last 4 miles of this climb for king and queen of the mountain bragging rights. I'm not going to lie, I pushed as hard as I could, but I was pretty beat. Dan rocked this climb and I couldn't keep up with him. Also, the fastest female racers caught me on this climb. They started almost an hour after me and 4 caught me on the climb. It's a little discouraging, but they are fast girls. I climbed it in 22:27. The fastest professional girls did it in 18s and the racing women in 19+. I'm content with my effort and time considering it is 106 miles into the race. And among the fun riders I was 70 out 536 and I think I was the 2nd or 3rd fastest fun riding woman.

We refueled in Afton and started the flat section through Star Valley. It was windy, but we were able to get in a few pace lines and the 3 of us worked well together. I was really amazed at how evenly matched we were. And grateful. I hated leaving cousin Steve, but it would have been even tougher to leave or be left by Alicia since we trained 6 months together for this. We were all pretty tired of the saddles by this point. We were all super bloated. Not sure if that is due to inhaling the food at each aid station or the dinner the night before. But we were all pretty spent. Alicia's tummy issues were the worst at this point and she struggled to hold the pace. She did a good job and holding our wheels until she got stuck behind someone with a flat. She lost our wheels and couldn't get back on. But we were able to regroup in Alpine and her bloating was somewhat relieved with GasX and mine with Coke.

The last section of the race is up Alpine Canyon following the the winding Snake River. This section is spectacular. I did wish I was floating down the river instead though. We had some good company to share the pulls. Until some crazy guys decided when it was there turn to pull to bump up the pace dramatically. I couldn't hold it, but neither could most of the group we were with so we let them go on ahead and we regrouped and continued to take turns pulling.

The last 10 miles through Jackson and into Teton Village were tough. At this point I just wanted to get done, so I just dug deep and pedaled hard. However, I soon realized Dan and Alicia were not on my wheel. I stopped and we regrouped. I wanted to cross that finish line with my team. We all just suffered through those last few miles and crossed that line together. Click here for a finish line photo.

I was so ecstatic to cross that line in 12 hours 21 minutes. We really didn't have a finish goal other than to finish. Our ride time was 11:02 and 18.4 mph. We had over an hour of stoppage. To put this in perspective Tom had 32 minutes of stoppage and that included a 15 minute break where he was contemplating quitting and a long 8 minute rest stop to refuel. We definitely can improve on our stoppage time. 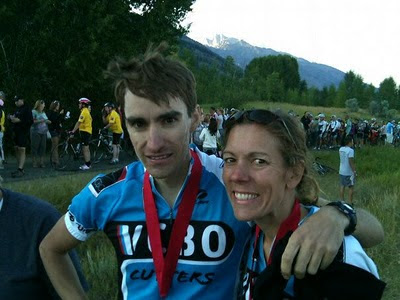 I am definitely planning on doing it again and would like to race it and try to break 11:30.

Highlights of the race include: Amazing support (thank you Jeff and Marta!), Strawberry Climb, riding and finishing with Alicia and Dan, perfect temps (lows in 50s and highs in probably 70s), sitting in a jacuzzi tub after in an amazing condo (thanks Mary!), watching Tom cross the line, my bike not falling off on the way to LOTOJA.

Lowlights include: having to eat, Salt River Pass, crazy long line to get our medals (luckily Marta saved us this hassle), seriously sore bum after sitting on a saddle for 12 hours, my bike falling off the car at 75 mph on the way home. (we are still waiting to hear from insurance company, but hopefully it won't be too big of a deal and they'll get me an equivalent bike.)

FYI: Tom rocked it even after bonking hard halfway through, but came back. He finished in 11:11 and 15th place in his start pack (which were a bunch of serious guys.)
Posted by Dansie Family at 1:21 PM 7 comments: 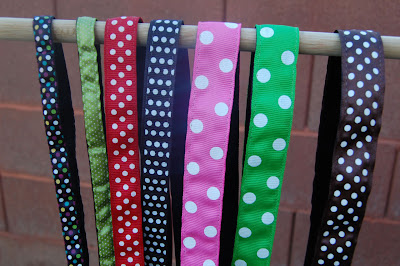 I am launching  new blog in an effort to help all runners, Run Cute. Check it out, and feel free to give me any advice.


Run Cute is blog devoted to cute, handmade running accessories. Currently, I have no-slip running headbands (they can be worn for so much more, though). But I will soon have available race belts that can hold your race number, gels and look cute.

Posted by Dansie Family at 11:18 AM No comments: