The following video shows a collection of photographs featuring the latest addition to our family. You will note that, unlike a traditional birth announcement, the slide show does not include the baby's name. This is due to indecision on the part of the boy's parents. As soon as we know, you will know (assuming you check this blog regularly, and further assuming we update it regularly).

Thanks to Dave for the inspiration for the slide show. 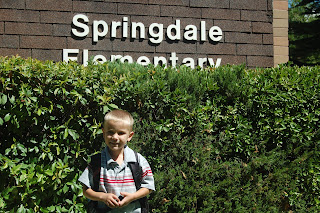 I guess this is Porter's month.
He started kindergarten and absolutely loves it. There are only 10 students in his class, 3 boys and 7 girls. And his teacher is Mrs. Barker. 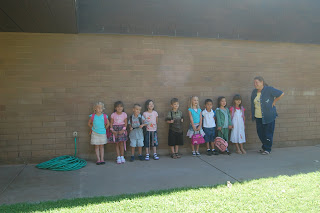 He gets to drive with daddy everyday. 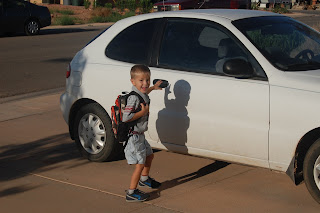 Eliza was a little sad when he left, but she knows I will need her help with the new baby so she doesn't mind staying home with me. 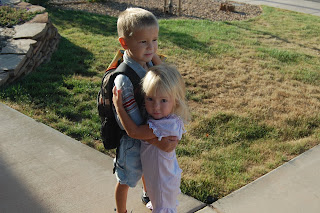 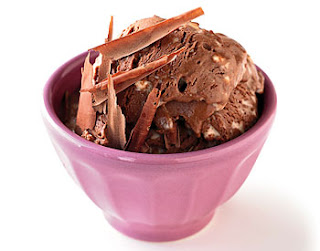 I tried a new recipe this weekend from Bon Appetit and thought I would share. It was a delicious chocolate-cinnamon gelato, a rich dark chocolate gelato with the perfect, little more than a hint of cinnamon. It was perfectly creamy and not too heavy like some homemade ice creams. It reminded me of Mexican hot chocolate, which I absolutely love. The addition of the toffee chips I would say is optional. It made the gelato a little too sweet and just added another flavor that detracted from the rich chocolate and fragrant cinnamon. Of course, I quadrupled the recipe and wouldn't recommend any less. Okay, maybe you can just double it for two of you.

We made it for a church chili and ice cream cook-off. It won first place (so what if there were no other ice cream entries, but maybe it would have won even with some competition).

Transfer gelato base to medium bowl. Mix in cream. Place bowl over large bowl filled with ice and water and cool, stirring often, about 30 minutes.

Process gelato base in ice cream maker according to manufacturer's instructions, adding toffee during last minute of churning. Transfer to container; cover. Freeze at least 3 hours and up to 2 days. 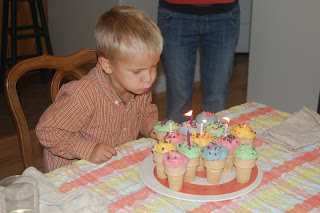 Porter had a fun Pioneer Day birthday. He got to have two parties, one with grandmas and grandpa and one with his friends a few weeks later.

He wanted a pirate party with his friends so we did just that.

All the pirates coming to the party received shiny skull and cross bone bandannas and an eye patch.

They built ships and raced them in "Snake Swamp." Unfortunately, most of them sank before they made it across the swamp.

They all went on a treasure hunt around the neighborhood; past wolves, a rose garden harbor, a pit of doom, the end of the world, to name a few. You'd be surprised at all the landmarks around a construction friendly neighborhood.

The pirates had to walk the plank across swamp. They were pretty talented at keeping their balance.

Finally,they came in to enjoy a pirate cake and ruby punch.

The pirates all seemed to enjoy themselves. Although, I will say that five-year-old pirates are harder than three-year-old princesses. 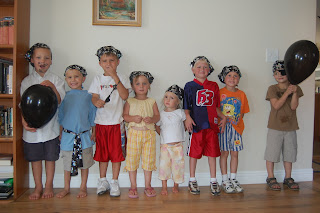 Porter Learns to Ride a 2-Wheeler 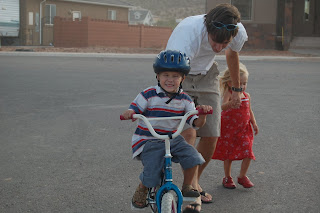 I am way behind in my blogging, but I finally downloaded a bunch of photos and have a bit of time. So be prepared for some new blogs. I am going to try to get them in before the baby comes because who knows how much time I will have after the new arrival.

Porter recently turned 5 (July 24). Just after his birthday, he decided hey I am 5 and I can ride a two-wheeler. He went out and practiced on his own with his neighbor who wanted to use his bike with training wheels. I didn't even know he was out there trying it out. He told me later, so that evening we all went out so Tom could help him a bit more. He got on the bike, Tom gave him a push and away he went. It was pretty fun to watch.

The fun lasted until he fell and got a tiny cut on his hand and was handicapped from any further bike riding.

He has continued to progress and now rides his own bike, not Eliza's girly bike. He can start on his own, but only if the pedals are in the right spot. He still is nervous to ride down any sort of hill so that will be our next goal. And to teach Eliza to ride her tricycle. 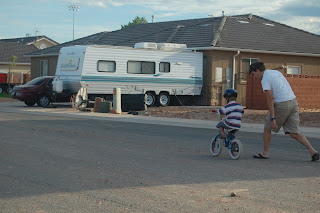 Posted by Dansie Family at 10:17 AM No comments: